Home / News / Representatives of various religions at the Karabakh table

Representatives of various religions at the Karabakh table 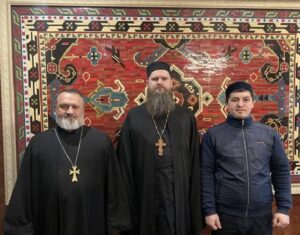 At the initiative of the head of the Russian community in Nagorno-Karabakh, a meeting was held between Christian clergy and a representative of the Islamic clergy.

On March 15, representatives of various religions and confessions, serving in the Russian peacekeeping contingent and living in Nagorno-Karabakh, gathered at a round table in Stepanakert.

“Truly faithful Muslims for true faithful Russian Orthodox are devoted friends and comrades-in-arms in historical processes,” Alexander Bordov, chairman of the Russian Community of Nagorno-Karabakh, said in his address to those present. “Unfortunately, many who call themselves Muslims or Christians, in essence, are not such, substituting concepts and thus misleading us.”

At the same time, Alexander Bordov added: “Russians have centuries-old spiritual ties with the Armenian people, we are eternal brothers in Christ and side by side we went through the most serious trials, more than once achieving common great victories. Armenians, along with Orthodox and Muslims, have made and are making a significant contribution to the construction of the Russian state, as Russian President Vladimir Putin has repeatedly said.

In turn, the representative of the Islamic clergy, Umakhan Saygitov, noted: “I am grateful to the head of the Russian community for this necessary and useful meeting. For his benevolent attitude towards Muslims. We are really close historically. It is necessary to do everything for a lasting peace in the long-suffering Karabakh land. Let the new generation compete in science, sports, creativity and hospitality. I can only regret that the civilian population is experiencing serious hardships. I urge everyone to think first of all about ordinary people, about children, women and the elderly.”

“We pray for peace in our land. We pray for the repose of the souls of the dead. We are all children of God. Today's meeting is very useful, we must continue to discuss and solve our problems, and, unfortunately, there are many of them. Until now, more than a year after the conclusion of the tripartite ceasefire agreement, attempts are being made on civilians, crimes of a different kind; for a week now, people have been freezing in their homes without heating. All this must be stopped immediately,” Father Mesrop Mkrtchyan, clergyman of the Artsakh diocese of the Armenian Apostolic Church, expressed his opinion.

Father Pakhomiy Shepel, a clergyman of the ROC MP, emphasized: “Of course, we must treat each other sincerely. Orthodoxy is being revived in Karabakh today. The number of confessors and communicants invariably increases with each Sunday Liturgy. Faith in the Lord will help to let goodness and love into the hearts of believers, this will affect everything.The Russian community is strengthening in every sense and is not only a symbol of the Slavic and Christian brotherhood, but also of the universal one, because there are Muslims in its ranks. Such unity can be only a pleasure. But today the Karabakh population has serious problems, and this makes me sad, people should be able to live and create in normal human conditions.”

Alexander Bordov summarized the results of the event: “We discussed a number of pressing issues, agreed to continue to meet in the same format. We have something to worry about, much of what is happening today is contrary to universal values, moral standards. We must do everything so that never again in history will Christian and Muslim mothers mourn their sons who died for the Karabakh land.”