The monastery is located 10 km south-west of Tonashen village of Martakert region of Artsakh, on the southern forested slope of Mrav mountain range. It was founded in the last quarter of the 17th century as the center of the Catholicosate against Gandzasar. The Yerits Mankants Monastery was built in 1691 by Catholicos Simeon A. Khotorashen (1675-1704). The architect is Sargis, the inscription of which is inside, on the north wall of the stage. The architect tried to make the church look like St. Hovhannes Mkrtich Church of Gandzasar.

The dome of the temple rises on four magnificent square, cross-columns and arches that enclose them. The arches also have a pointed needle. The church is interesting inside, a spacious hall, the majesty and perfect serenity of which is further accentuated by the splendor of the columns that rise, the sloping arches, the mystery of the rays of the sun penetrating through the large windows of the drum.

The rock stone is preserved in the center of the high tabernacle, the baptistery in the northern wall. The monastery is paved, the eastern half of which is completely preserved. The presence of the oldest numbered khachkars on the walls of the church testifies to the existence of an on-site cemetery, perhaps a church or a chapel.

Since the founding of the Yerits Mankants Monastery, the conflict between the Catholicosate of Gandzasar has begun, forcing the Catholicos of All Armenians to mediate.

The Yerits Mankants Monastery as a monastery-fortress played a great role in the liberation struggle in Artsakh at the beginning of the 18th century.

In 1819, with the death of the anti-Catholicos Simeon II (Simeon the Younger), the Catholicosate of the Yerits Mankants Monastery was abolished.

A number of manuscripts created on the spot prove the existence of a church that became a pen in the Middle Ages.

The monument is in harmony with its unique nature and looks like an integral part of it. 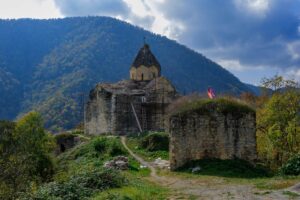 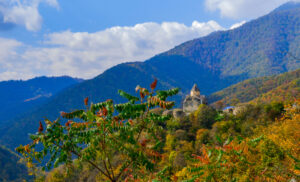 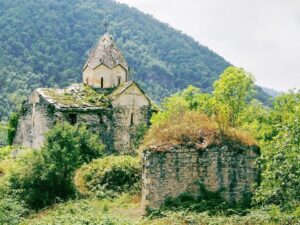